From Eaglepedia
Jump to: navigation, search

This ECM diagnostic test if an often requested How To. The following information is compiled from a variety of sources and is accurate to the best of our knowledge. I have credited sources when available.

All 6 cylinder AMC Eagles sold after the 1981 model year came equipped with the Carter BBD Feed Back Carburetor. With time the carb itself and the Electronic Control Module (inside the car) and the related emissions equipment all begin to have problems which ultimately results in poor engine performance. The ECM system controls both the ignition timing and the air to fuel ratio. As these systems fail the running qualities of your engine deteriorates.

Symptoms of a failing ECM system can include: surging or missing at idle; knocking or pingin; loss of overall power and/or an inability to maintain highway speeds; and stalling with the inability to restart.

This diagnostic test may also be considered when changing to a dfferent type of carburetor or fuel delivery system. This is what the finished project will do to your AMC Eagle: With no distributor signal input, the ECM will not know the engine is running and remains asleep. In this state, the input sensors and controlled devices have no function. The idle speed controls, BBD Stepper Motor, and the Pulse Air System does not work. The items that still function are: The Decel valve; air doors on the aircleaner; the EGR valve; the Evaporation Canister; the electric choke; the manifold heater; abd the PCV system. This is why this diagnostic test should only be performed to determine if you have a faulty ECM.

The Following Steps are needed to be done if you keep the BBD Carburetor. Steps one and two can be skipped if you are switching to another carb or to fuel injection.

1. Warm up the engine long enough for it to be operating in the closed loop if the ECM still works. 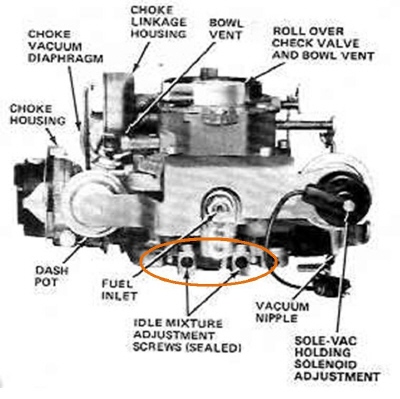 2. With the engine still running screw in the idle jets at the base of the carb so that the needles controlled by the stepper motor move.

This is done to force the ECM into putting the stepper motor driven needles into the full rich position. When this happens you will see that the needles will be pushed all the way inside the carb and the tone of the air going thru the carb will get much lower and the engine will slow down and begin to miss. At this point shut off the engine and disconnect the plug for the stepper motors. This plug will now remain disconnected so tuck it away some where until it can be reinstalled when the test is completed. It is reported the BBD will run fine with the stepper needles in the fully extended mode. So further carb adjustments may or may not be necessary.

NOTE The next two images represent what will be changed. They are not correct for all model years. We have provided specific information for the various wiring changes that occurred. 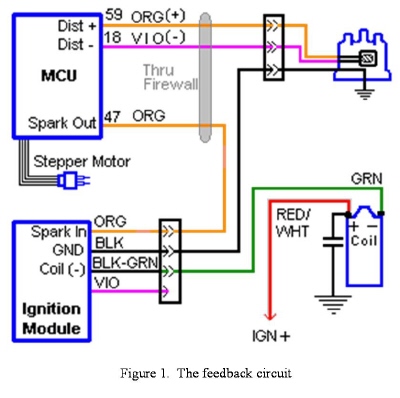 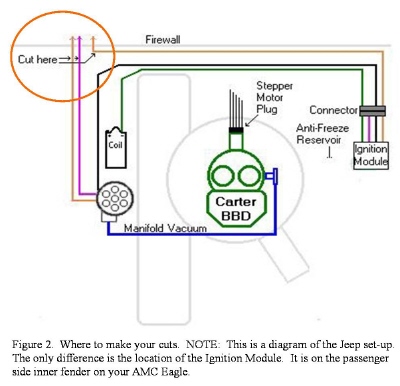 It has been determined that a variety of wire color combintations were used througout the model years. So far we have determined at least 3. We are attempting to learn what they were for every year. Here is what we have so far.

A note about the following diagrams. They show only the Ignition Module and the wires we are interested in (two other wires in a separate harness are not shown). The round circles are the connecting plugs. The wires on the right are those leaving the plug. Where there is no wire means there is not a wire leaving the plug. Make sure you can reinstall to original conditions all wiring connections after you have completed your tests.

1980 Feedback system not used on Eagles. Nutter not needed.

On the 1981 Feedback cars the purple and orange wires from the distributor went into the dash and into the ECM (Figure 1 above). You will need to change these two wires.

To do this you will have to pull the wires out of the split loom and covering and follow them carefully. The orange and purple wires from the distributor both go directly into the firewall. There is also an orange wire from the ignition module that goes into the fire wall at the same place. Cut the two orange wires and splice the two together using insulated connectors. Cut the purple wire here as well (See Figure 2 above or the figure just below these instructions).

There may or may not be a purple wire coming out from the plug near the ignition module, so you may need to add a section of wire, preferably 16 gauge. (We suggest purple to keep things uniform). Again referring to Figure 2 find where the purple wire is that goes into the plug from the ignition module is and splice one end of your new wire into it. Run the new wire to where you cut the other purple wire by the firewall and splice into it. Make sure to use insulated connectors for all splices. Figure 3, at the end of this article, represents what the finished project looks like -- there may be wiring color differences.

1982 AMC Eagles used an unique Ignition Module. Information regarding this year is pending. 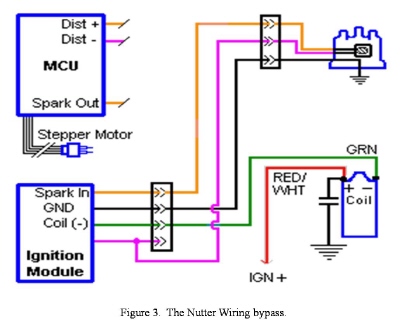 Final Note If your vehicle runs "like new" then you likely had a failing ECM. Once you have isolated the problem with your ECM or other component make sure to reinstall everything as it was before the Diagnostic Tests were made.