Thank You Gil-SX4 and IowaEagle for all the work put into this history!!!

Also many thanks to all the members who sent in photos of their Eagles!

The American Motors Corporation (AMC) was formed in 1954 with the merger of Hudson and Nash. Both independent car companies had been known for their innovations; despite this they were both struggling to remain economically viable. After the merger was completed Hudson’s Detroit plants were shut down and all automobile production was consolidated within Nash’s Kenosha Plants. And thus began the saga of the American Motors Corporation. The last independent U.S. auto maker which supplied millions of drivers in the United States, Mexico, Australia, and in other countries world wide with Ramblers, Javelin/AMXпїЅs, Hornets, Gremlins, Jeeps and even Pacers to name a few of their well remembered nameplates.

Fast forward to 1978. AMC was reeling from lagging sales. Their tried and true, dependable small Concords (based on the Hornet) and Spirits (based on the Gremlin) were not selling well and AMC was cash starved having sunk what development money they had into the innovative, far ahead of its time, but failing Pacer models. AMC was no longer producing their larger models but they were selling tens of thousands of Jeeps. AMC execs knew they needed another niche model but had no serious money for development. So what they do? They reached into their auto and Jeep parts bin and in true AMC fashion came out with a new model that also in true AMC fashion was to far ahead of its time пїЅ about two decades ahead of an auto craze that would sweep the nation. Of course that new model was the AMC Eagle.

The following excerpt from an article All-Wheel-Drive Revisited, Automotive Industries, Feb, 2001 by Don Sherman by provides us with some background about the AMC Eagle’s development,

“Jeep’s chief engineer Roy Lunn orchestrated 4WD’s next leap ahead when he joined an AMC Concord body with a reconstituted Jeep driveline. Retired AMC chairman Gerry Meyers recalls, “Our initial reaction to Lunn’s concoction was, ‘What the hell is it?’ The body was raised an extra four inches for transfer-case clearance and the wheel wells were wide open.”

Lunn built on Quadra-Trac’s success with a more elegant AWD system for the Eagle. The New Process (later New Venture) model 119 transfer case he selected retained a center differential, but the limited-slip function was now provided by a viscous coupling. This silicone-filled device provided controlled slippage for smooth, dry-pavement cornering with the automatic locking necessary for low-traction conditions. Lunn’s other special feature was the Eagle’s independent front suspension, achieved by mounting the front differential to the engine block and providing drive to the wheels via universal joints and half shafts.

A 4WD car was the next logical step for AMC, according to Meyers. “After the Pacer, we were looking for something fresh and cheap to produce. We had given up on automobiles, and all of our creative efforts were focused on Jeep. So Dick Teague [AMC design chief] took Lunn’s 4WD car into the studio to improve the cosmetics by adding plastic skirts around the wheel wells. With the appearance issue solved, producing the Eagle was a no-brainer.

“We were so hungry for something different that we didn’t bother with market research,” Myers continues. “It was, for all intents, a no-cost experiment that began with three Concord body styles in 1980 and continued with two more Spirit-based models in 1981. Sales were sufficient to make us glad we built the Eagles, and our dealers — especially those in Colorado and New England — were thrilled to have these unique products.”

Popular Science writer Ed Jacobs in a 1979 article from the same magazine wrote about the new Eagle, ” This new flock of off-road vehicles is designed for people who want the all weather traction and safety of four wheel drives, but don’t like the truck-like four wheelers currently on the market. They ride about as comfortably and handle about as well as any other cars their size on the road. Off road they behave more like mountan goats as do their truck like Jeep cousins.”

The first AMC Eagles debuted during the 1980 model year and sold well, for AMC through the first few years of production. With the merger of AMC and Renault in the mid 1980пїЅs AMC no longer aggressively marketed the Eagle and by the time Chrysler purchased AMC in 1987 the AMC Eagle was down to one model, the station wagon, and sales amounted to only a few thousand cars.

September 1979 saw the debut of the1980 AMC Eagle. These full-time all wheel drive vehicles were based on the compact rear wheel drive Concord, which was basically a somewhat upscale version of the popular Hornet. The Eagle was first available in 2 and 4 door versions and as a station wagon. By AMC standards the AMC Eagle was a success with buyers who wanted a four wheel drive vehicle with with the features of a car rather than a pickup. During the first year of production all Eagles were equipped with AMC’s proven 258 in-line 6 cylinder engine; an automatic transmission based on Chrysler’s TF 998; a New Process model 119 transfer case, and Dana model 30 and 35 differentials. The AMC Eagle was also a test bed for for what would become the SUV’s of the ’90’s.

Its Concord/Hornet heritage is evident although Eagle’s sat 3 inches higher sported 15 inch instead of 14 inch wheels, and had 1 inch longer wheel base. A total of 9,956 four door Eagles were prouduced in 1980. 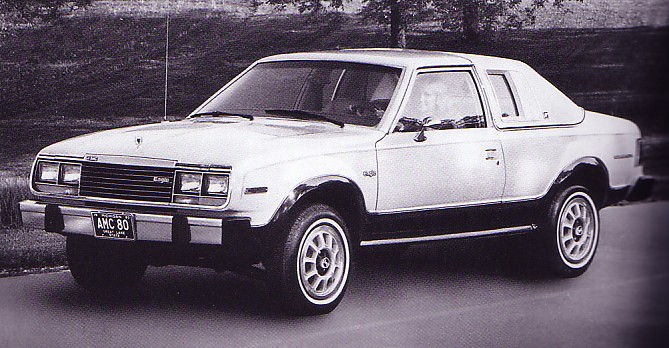 The two door 1980 AMC Eagle sedan was the lowest priced Eagle that year and shared the trim level found on the AMC Concord D/L. The Eagle, however, did not display the D/L markings. A total of 10,616 two door Eagles were prouduced in 1980 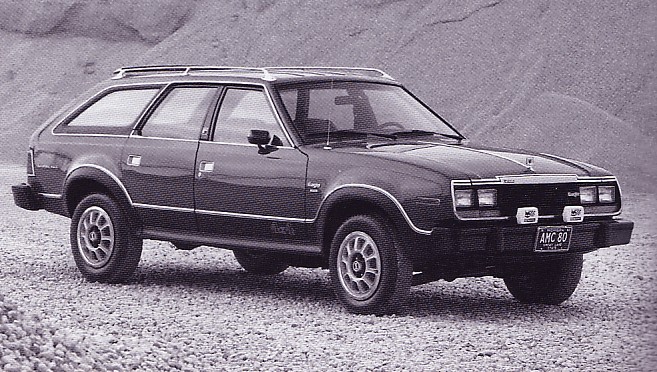 Destined to be the most popular model and the only model available througout the entire production run. In 1980 its popularity was evident with the production of 25,807 units.